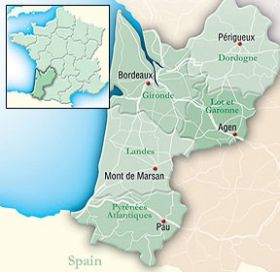 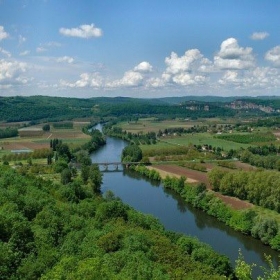 From pine-needled forests to flourishing vineyards, from the picturesque peaks of the Pyrenees to the beautiful beaches of Biarritz, there are more contrasts than similarities in Aquitaine. The region is made up of the diverse departments of castle-laden Dordogne, sandy Gironde, forest-blanketed Landes, river-covered Lot-et-Garonne, and all-encompassing Pyrennes-Atlantiques, each with their own unique character.

Whether it's the world renowned food grown here, the enviable climate or just the great waves for surfing, Aquitaine is clearly blessed with more than its fair share of natural assets. But there's more to this region than its outstanding natural beauty - chic coastal cities, imposing fortresses, and busy port towns are set against the backdrop of the towering mountains and the bright white coastline. The result is the perfect destination for anyone looking for a holiday in France.

Aquitaine is home to the world's second oldest golf course.

By road...Aquitaine benefits from reliable road links with most of France, including the A10 from Paris which means the journey to Bordeaux is just over 6 hours.

By air...There are hundreds of flight available from all over the U.K (Birmingham, Edinburgh, Leeds, London and Southampton to name a few) to several different airports in the region including Biarritz, Bergerac, Bordeaux and Pau. The flights are offered by a range of airlines including Flybe, Ryanair and British Airways.

By public transport...Aquitaine is easily accessible by train, with a full schedule of trains from all over France including the high-speed T.G.V. Atlantique. For example, the journey from Paris to Bordeaux only take 3 hours by train with departures regularly throughout the day.