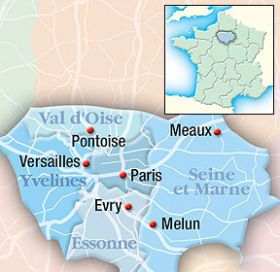 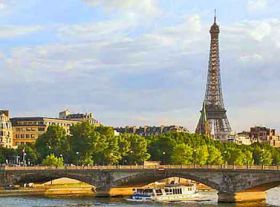 At the core of Île-de-France lies Paris, which both conforms and confounds stereotypes. For those who want them, there are the bohemian cafés lining the wide tree-lined boulevards as chic women browse couture nonchalantly in the shade of the Eiffel tower. But there is also the other side, which boasts artist hangouts crammed onto winding cobbled streets, as jazz echoes along the Seine.

Outside of Paris, it's not easy to live in the shadow of the most-visited tourist destination in the world, but if you look closer, Île-de-France offers its own treasures which shouldn't be missed either. From the parks and towns of the suburbs Seine-Saint-Denis, Hauts-de-seine, and Val-de-Marne, the castle at Versailles, a rather different castle in Disneyland, to the royal residences of Fontainebleau, and the wilder departments of Val-d'Oise, Yvelines, Essonne, Seine-et-Marne there is a lot more to Ile de France than just Paris.

If the whole of France was as densely populated as metropolitan Paris, the entire population of the world could live there.

By road... Getting to and away from Paris by road is easy, as it is linked to nearly all the main motorways. It is only a couple of hours from the Shuttle tunnel, but the only problem is that driving actually in Paris can be a real headache as there is always a lot of congestion.

By air... As home to the capital city, the region has excellent national and international air links. Nearly all airlines in the UK fly to Paris from all over the UK, either to Orly or Charles-de-Gaulle, both of which are easily accessible. However, Ryan Air flies to Beauvais Airport, which although still fairly nearby is 1½ hours out of Paris, although may be closer to your destination if you are staying in the wider Île-de-France region.