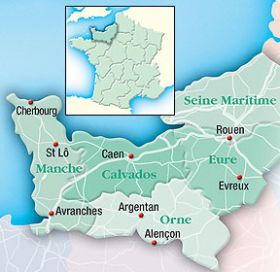 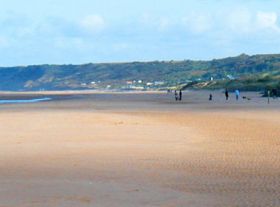 If there was an award for Most Dramatic Region, Normandy would be tearfully accepting it every year. Normandy's history is almost ludicrously full of drama. It all seems to start at the outset with the battle of Hastings, commemorated in the hugely famous Bayeux tapestry, which is housed here, but from there it spreads out to every corner of the region, ranging from the touching impressionist paintings by Monet of Giverny, to the emotionally-charged Omaha beach, to the impressive construction of Abbaye du Mont-Saint-Michel.

The landscape is no less theatrical, and the blustery beaches, gravity-defying rock formations and sweeping sands which populate the region both rival and compliment the man-made excitement. Throw in hiking, biking and watersports, and you've got a tourist destination which demands your attention unlike any other.

Before moving to Giverny, Claude Monet had only ever seen Giverny through a train window, but was so struck by its beauty he decided he had to live there.

By air... Depending on where in the region you are staying, it might be easiest to fly to Paris and drive from there. Otherwise, for Western Normandy, RyanAir and Air France run a service between London and Rennes.

By public transport... There are direct trains from from Paris Gare Saint Lazare, although they can get fully booked in peak season so its best to plan ahead where possible. There is also direct access by ferry from the UK, to Cherbourg, Caen (Ouistreham), Le Havre or Dieppe.