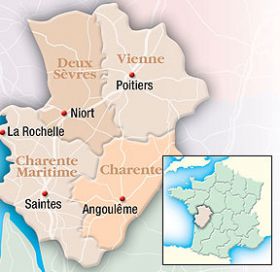 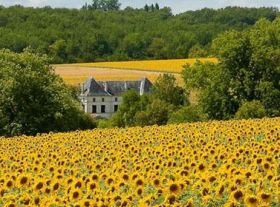 Poitou-Charentes may lack the glitz and glam of its flashy neighbours along the Atlantic coast, but it makes up for it with a huge personality. Instead of lounging on the beach, you'll be kayaking through the "Green Venice" marshes in Charente, and instead of luxurious casinos you will instead bask in the glory of medieval fortifications in Vienne and science museums about the future in Deux-Sevres.

But that's not to say the regions doesn't still boast some of the best aspects of the Atlantic coasts, with Charente-Martime showcasing beaches lined with spotless sand, the old port at La Rochelle and the jet-set crowd drinking the region's famous Cognac on the exclusive island of Isle de Re. There are two distinct sides to Poitou Charentes so take some time to get to know them both.

The region gets 2,250 hours of sunshine every year.

By road... The Poitou-Charentes region is crossed by the main motorway between Paris and western / south-western France, the A10 (Paris-Tours-Bordeaux), which makes it easy to drive to and through.

By air... Various low-cost carriers fly to La Rochelle, but the easiest way to reach the region is probably to fly to airports just outside the region, at Bordeaux, Bergerac and Limoges and then sort out addition transport to your destination in the region.

By public transport... Buses from Paris are readily available to Poitou-Charentes, but take so long its worth spending a little more for the TGV, which is much more reliable for timings.